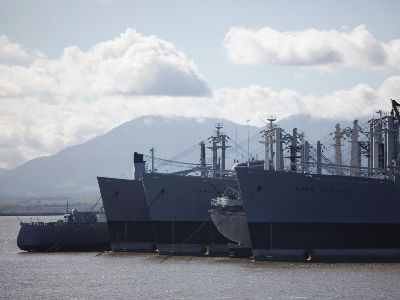 Spirits of the Bay’s Past

Not only is Suisun Bay home to the famed abandoned Ghost Fleet, but the largest brackish tidal marsh in the western United States is also home to a plethora of birds, fish, and river otters. Less than an hour from campus will feel like a world away as you take in the panoramic view of the marshlands, Bay, and catch a glimpse of aircraft departing from nearby Travis Air Force Base.

Beyond the beautiful flora and fauna, Suisun Bay holds a fascinating place in history. A skeletal fleet of retired military vessels sits in the water, once the largest assembled WWII fleet on the West Coast. At one time there were as many as 350 ships in the Suisun Bay Reserve Fleet (SBRF), but these days their numbers dwindle below a dozen. Salvaged for scrap metal and parts, the vessels in the SBRF once sailed all over the world, carrying civilians and soldiers on the high seas.