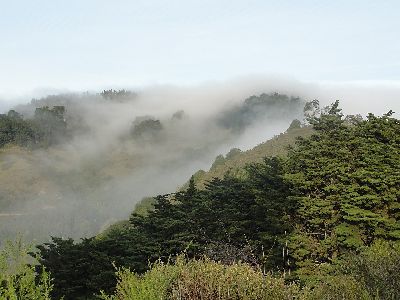 Claremont Canyon is a perfect example of how invasive species impact an ecosystem, and how critical native species are for a shifting environment. Invasive eucalyptus was planted in the canyon by Frank Haven, the owner of the Claremont Hotel, because the species was thought to be a valuable lumber source. Beyond its choking out of native biodiversity, eucalyptus is highly flammable and has contributed to many wildfires over the centuries. Modern fire mitigation helps keep residents safe, but nothing is as powerful as a natural ecosystem.

On a clear day, the top of the canyon boasts unobstructed views of Berkeley, Oakland, and the northern Bay. Start off in the cool lower canyon and climb up to the exposed ridge, where you’ll be rewarded with the lookout points. The ridges along Berkeley and Oakland are connected with a robust network of trails, feel free to dip down into the adjoining canyons to explore other ecosystems.